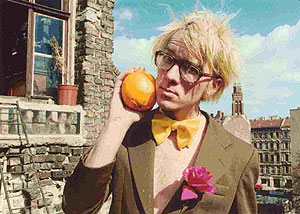 Pastor Leumund preaches against reason and transforms the audience into a non-confessional congregation, singing and praying.

Ever since his Swiss exile, when he occupied the Cabaret Voltaire, only later to be forced to experience its institutionalization, he has had a problem with the term Dada.
His activities and his use of language he has now begun calling 'actually existing Dada'.

Jan Theiler, a.k.a. Pastor Leumund, is a writer, performer, and interactivist. He is the founder of Fondation Krösus in Zurich (www.kroesus.org) and the Bergpatei in Berlin (www.bergpartei.de), as well as the co-initiator of occupations of art centres, workshops for political pop, and collective irritatinment. He wanted to save Berlin’s Palast der Republik until the very last moment.
top